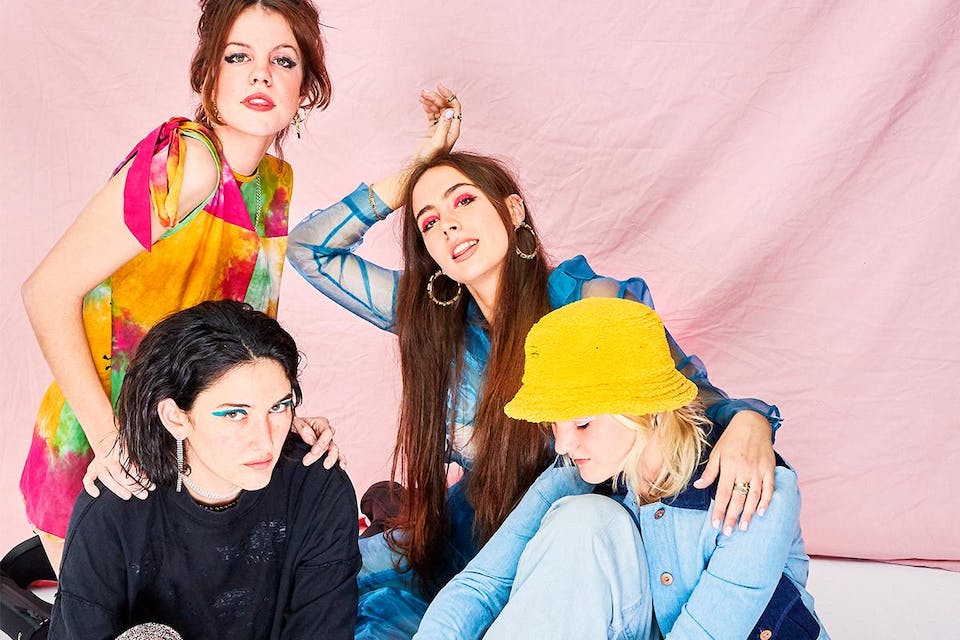 Each time they take the stage, Madrid-bred rock band Hinds create a kind of wild magic, a feel-good free-for-all often complete with synchronized dancing and giddy crowd-surfing from the members themselves. While the band’s first two albums channeled the euphoric energy of their live show in their gorgeously punchy take on garage-rock, their latest full-length adds entirely new texture to their sound. Produced by Jenn Decilveo (The Wombats, Ben Platt and Anne-Marie), ​The Prettiest Curse​ finds the band letting their imaginations run more freely than ever, even as they share some of their most emotionally heavy material to date. The follow-up to 2018’s ​I Don’t Run—​ an album praised by Rolling Stone as a “gem of indie-rock-revivalism, making faux-naif surf licks and Mo Tucker drum beats seem new all over again”—​The Prettiest Curse​ takes its title from the sometimes-daunting experience of giving your soul to rock-and-roll. “We have this incredible job, but it’s really transformed the way we live,” says Cosials. “We know we’re not going to stop, so we’ve decided to embrace it—to see this curse as something pretty.” Perrote adds: “A lot of these songs are about feeling lonely, missing home, being apart from the people we love. But even though we’re alone so much, we’re all alone together.” In the making of ​The Prettiest Curse​, Hinds devised a brilliantly unpredictable vocabulary for communicating their most painful feelings. Unfolding in frenetic guitar riffs and buzzing basslines, powerful drumming and delicate piano work, the album endlessly delivers massively catchy melodies and vocals that growl and sigh with equal ferocity. The effect of all that unrestrained expression is fantastically dizzying, made even more so by Hinds’ constant back-and-forth between their native tongue and English. Kicking off with “Good Bad Times”—a long-distance serenade lit up in airy harmonies and shimmery guitars—​The Prettiest Curse​ offers a fitting intro to its emotional landscape: melancholy yet joyful, weary yet defiantly wide-eyed. On “Riding Solo,” Hinds deepen the mood with a dreamy but determined meditation on loneliness and longing, revealing their supreme talent for crafting a killer love-song lyric (“All day feels kind of useless/If I don’t give you my night”). “That one’s about feeling like you’re everywhere and nowhere at the same time, or feeling like you’re always alone even when you’re with other people,” Cosials points out. Although much of ​The Prettiest Curse ​radiates raw sensitivity, Hinds never shy away from speaking their truth with uncompromising boldness. On “Just Like Kids (MIAU),” for instance, the band documents some of the hideously sexist remarks they’ve endured over the years (e.g., “You’re always out of tune/And there’s no place there for you”), then fire back with the sheer force of their untamed joie de vivre. “Those lyrics all come

 from actual conversations we’ve had,” says Perrote. “From now on when I get the question ‘What’s it like to be a girl in a band?’, I’m just going to sing that song back to people.” Elsewhere on the album, Hinds find an unlikely glory in owning their vulnerability: the beautifully woozy “Boy” builds its climax around Cosials’s manic pleading for the love she’s left back home, while “Take Me Back” spins heartsickness into some sublimely strange poetry (“I woke up sick of not being enough/My birds are still singing yesterday’s song”). And on “Come Back and Love Me <3,” the band drifts into girl-group terrain as they sweetly conjure an unspeakable tenderness. “Sometimes in the past we’ve censored ourselves because we worried we might sound too pop or too cheesy,” says Cosials. “This time we were just like, ‘If this is how the song’s coming out, let’s just do it. We’ve got to be true to ourselves.’” That decision to follow their instincts also deeply informed the recording process behind The Prettiest Curse,​ a factor that made Decilveo the perfect collaborator. “Jenn works in a way that’s very natural, where she’s constantly recording and catching every moment,” says Perrote. Along with embedding the album with spontaneously captured sounds (the crack of a can opening, snippets from a phone conversation), Decilveo experimented with strategically warping the band’s vocal output. “Jenn would take our voices and transform them so they sound like a guitar or a violin or a dinosaur—something you’d never recognize as human,” says Perrote. As they endlessly explored new sonic possibilities, Hinds upheld their longtime recording rituals, such as Cosials’s habit of adding a certain visual element to her singing (“If I’m going to do a sad song, I always paint my lips,” she says) and the band’s push for a palpable connectedness during their performance. “We like to all look at each other as we’re recording,” notes Perrote. “It was a challenge because of the way the studio’s set up, so we ended up using a big panel of glass to make it work and isolate sound. That way we could see each other, even if we couldn’t hear each other.” Hinds first discovered their undeniable camaraderie back in 2014, three years after Cosials and Perrote first linked up and started covering songs together. Making their debut with the Bandcamp-released singles “Bamboo” and “Trippy Gum” in 2014, the duo quickly caught the attention of tastemaker press, and penned global record deals that kicked off their metroric rise. Once Grimbergen and Martin joined the lineup, Hinds began earning buzz as a must-see live band, and soon became one of the biggest indie acts ever to emerge from Spain. Since then, the band released their breakout debut album ​Leave Me Alone​ and their sophomore record​ I​ ​Don’t Run​, which Hinds co-produced alongside Gordon Raphael (the producer behind The Strokes’ iconic first two albums), earning ​mass critical acclaim. Since then, the band have performed on The Late Show with Stephen Colbert,​ won over crowds at festivals like Coachella and Glastonbury, played sold-out shows all over the world, and have even started their own limited edition cruelty-free makeup line​.  

In bringing ​The Prettiest Curse​ to life, Hinds purposely chased their most outrageous impulses, sometimes deliberately messing with audience expectations (“When people hear this record I want them to freak out and just go, ‘​What?​’” says Martin). Not only a major creative leap for the band, the album also marks a whole new level of confidence in their artistry. “If baby Hinds could hear this record, they wouldn’t believe it—it’s so far from where we started,” says Perrote. “It’s the first time we truly enjoyed the process and didn’t ever feel we had something to prove. I’m so proud that we just let ourselves have fun, and never held back from doing what we wanted.”