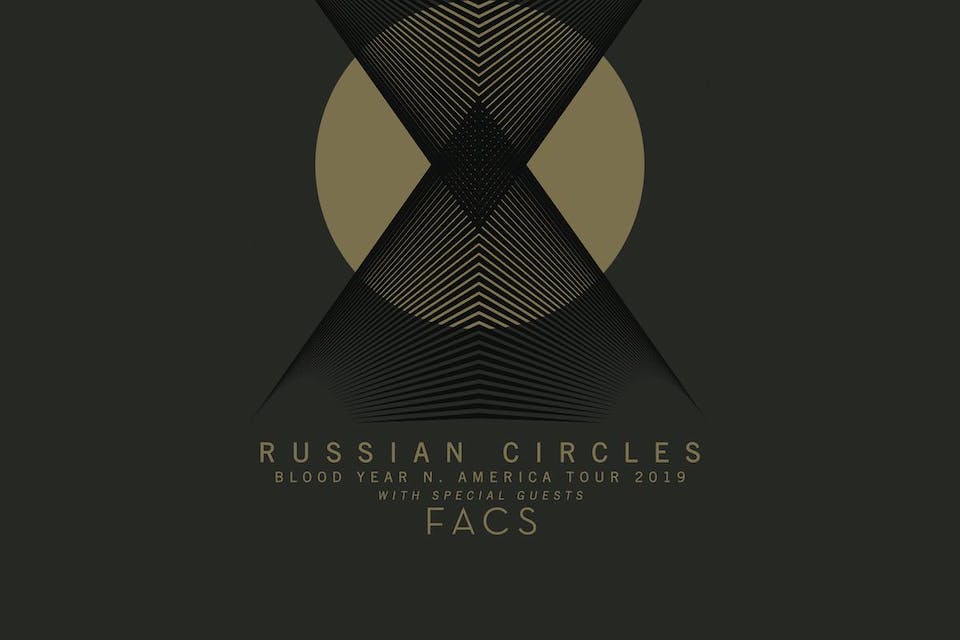 At the end of 2014, Chicago trio Russian Circles celebrated the10-year anniversary of their first show. A decade is a long time for any band to persevere, let alone a band that mines the relatively unmarketable niche of protracted instrumental dirges. But whereas many bands on the louder end of the rock-based instrumental world are content to work within the confines of the crescendos and washed-out timbres laid out by their predecessors, Russian Circles persistently expand their creative boundaries by working with a wider swath of sounds and structures. In many ways, their last album Memorial was a fitting cap to that first decade; it was an elegy to the past, a token of remembrance to the aural explorations of the band’s formative years. It encompassed the many facets of the band’s catalog: harrowing gloom, cinematic majesty, primitive bludgeonings, bittersweet dexterity, and morose minimalism.

With their sixth album Guidance, Russian Circles carry on in their quest to conjure multi-dimensional dramatic instrumental narratives and to scout out new textures from their respective instruments. Songs aren’t constructed out of highbrow concepts; they’re forged out of gut instinct and base emotional response. Nor was the band—as is often the case with artists later in their career—interested in testing their fans’ patience or securing a new broader audience with a radical reinvention. Instead, Russian Circles use Guidance to continue examining the polarity of quiet and loud, complexity and simplicity, ugliness and beauty. Every Russian Circles album has had its share of new sonic vistas, and Guidance finds the band still searching out new sounds while continuing to play to the collective strengths of guitarist Mike Sullivan, drummer Dave Turncrantz, and bassist Brian Cook. Starting with the meditative restraint of album opener “Asa”, Guidance sets off on a path of metallic savagery (“Vorel”, “Calla”), arpeggio tectonics (“Mota”), mercurial anthems (“Afrika”), somber segues (“Overboard”), and seismic Americana noir (“Lisboa”). With the help of engineer/co-producer Kurt Ballou and his God City Studio, Russian Circles were able to capture this broad tonal palette and wide array of emotional motifs into a cohesive journey through the tumultuous corners of human existence.

We often expect artists to fall into patterns and formulas, but for Russian Circles the creative method is still a mystery. Songs develop at their own pace. Inspiration comes from strange sources. If anything, the process of writing is every bit the enigma it was back when the band crafted their first song in 2004. Life itself is a struggle with the unknown and a search for meaning, and the creative process for Russian Circles has mirrored that pursuit. The radical dynamic shifts and straightforward production of Enter, the lockstep metallic attack and pensive comedowns of Station, the symphonic grandeur of Geneva, the grit and grime of Empros, and the oscillation between melancholy and wrath on Memorial were all incremental steps towards an ideal, and Guidance brings the band that much closer to that realization. In the interim between albums, a veteran handed off an envelope of war photos to the spouse of a band member. The photos depicted a man being led to his execution. There was no context for the traumatic scenes, no history, no background. Yet the dignity this anonymous figure exuded in his fatalistic march resonated with the band. Here was someone that knew his fate and marched boldly towards his destiny. The band used these photos for the Guidance album art, knowing that we all march towards our own conclusions, and we can only hope that we face our futures with the same honor and nobility. If the band’s fourth album Empros (Greek translation: Onward) was a statement of perseverance, Guidancebecame a statement of striding into the future undeterred by what lies ahead.

Guidance comes out August 5th on Sargent House. The album is available on vinyl and CD, as well in all standard digital formats.

Chicago trio FACS was founded in 2017 by former Disappears members Brian Case and Noah Leger, along with their bandmate Jonathan van Herik. After van Herik amicably parted ways with the group just before the release of their debut album Negative Houses, Case and Leger recruited longtime friend Alianna Kalaba (Cat Power, We Ragazzi) to play bass and FACS began methodically destroying live venues across the world. Lifelike is their sophomore release; six tracks clocking in at half an hour, carrying forward the musical trail blazed by the debut towards a new frontier.

Lifelike occupies a space in between the band’s debut and Case and Leger’s work with Disappears, applying minimalism and space in compositions that reside somewhere near the realms of post-punk, art-rock, shoegaze, industrial music and post-rock. Lifelike however adds a more melodic sensibility, without sacrificing any of the debut’s punishing sonic muscle, with a discernible audial force perceivable thru the speakers (credit due to engineer Jeremy Lemos’ recording via Electrical Audio as well as John Congleton’s mixing, and Jason Ward of Chicago Mastering Service for accurately capturing the punishing heft of the band’s live sound).

Kicking off with the lumbering “Another Country”, whose opening drone lulls the listener into a trance before Leger’s drums crack the earth below. The band veers close to This Heat territory here, with Kalaba’s minimal bass throb and Case’s nearly unrecognizable guitar loops and multi-tracked voice punctuating the spaces between. Album standout “In Time” careens with purpose with cascading sheets of guitar noise over the rhythm sections ever-advancing march, while “XUXA”s melodic washes of monochrome eases the tension ever so slightly. Side two awaits, with the anxiety-ridden opener “Anti-Body” and the claustrophobic “Loom State’s clanging aura of menace. “Lifelike” closes with “Total History”, whose syrupy shuffle belies the blunt-force trauma of its closing minutes, with the sheer weight of sonic force seeming to blow out the speakers it emanates from. A phoenix returning to the ashes from whence it came.