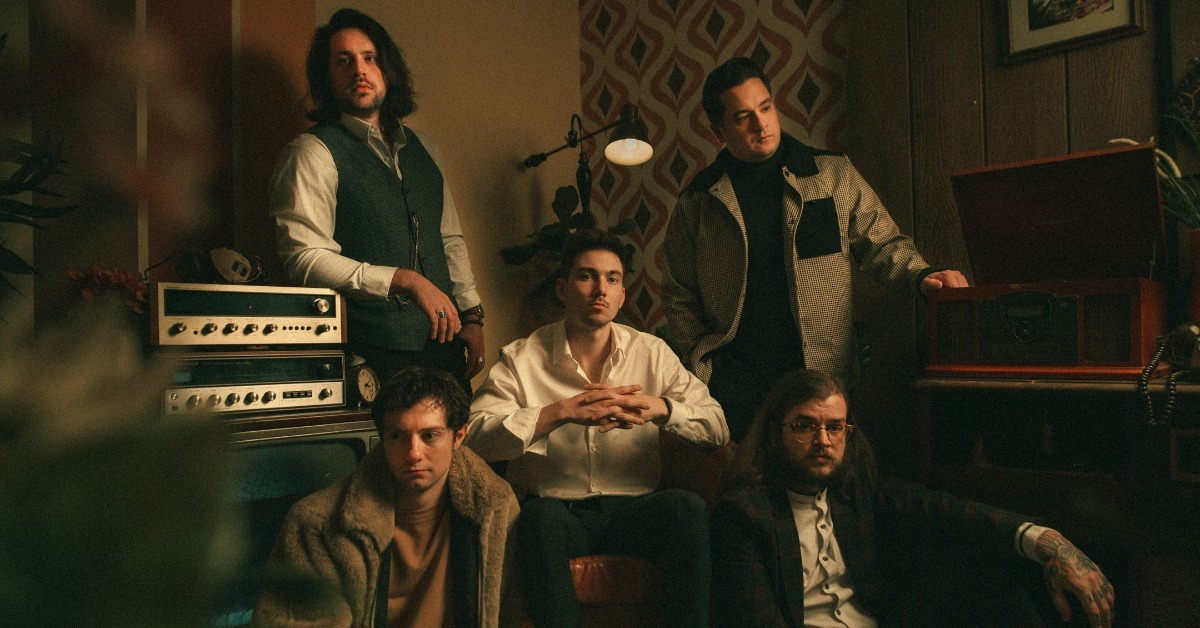 Since forming in 2011, when its band members were only in high school, the Philadelphia-based quintet—composed of vocalist Collin Walsh, guitarist/vocalist Dallas Molster, guitarist Andrew Kyne, bassist Nick Ventimiglia and drummer Nick Veno—has emerged quickly from the Philadelphia punk scene, establishing a solid fan base and sharing stages with the likes of Cute Is What We Aim For, Knuckle Puck, Neck Deep, Seaway, and more. Working with producer Kyle Black (State Champs, Handguns, Hit The Lights) for their Fearless Records debut album, Adornment, Grayscale has honed their talent of constructing strong hooks, relatable lyrics and catchy riffs, all the while coming into their own distinguished sound. Through their unbarred emotion and unique blend of alternative rock and punk roots, Adornment, sees the band expand their sonic palette, further illuminating their skill of creating well-narrated stories paired with palpable emotion that urges listeners to dive in and craft their own narratives.

hey Alexa, show us the 13 new shows Neumos & Barboza just announced 🗣⁣
calling 𝐚𝐥𝐥 𝟗𝟎’𝐬 𝐁𝐀𝐁𝐈𝐄𝐒! our July edition of Trivia Tuesdays at The Runaway will be all about 𝘛𝘏𝘌 𝟿𝟶’𝘴 😎 think Furby, Clueless, and JNCO jeans! ⁣⁣⁣ ⁣⁣⁣ every Tuesday at 7pm! free to play, prizes/cash to the winners!
we’re halfway through the year (🤯), what’s been your favorite show thus far?
in case you didn’t know where we stand. ⁣ ⁣ stay tuned for a fundraising event we’re working on to benefit abortion access. ⁣ 𝐚𝐛𝐨𝐫𝐭𝐢𝐨𝐧 𝐢𝐬 𝐡𝐞𝐚𝐥𝐭𝐡𝐜𝐚𝐫𝐞.
we take our low ticket warnings very seriously 🎟 when we say it, we mean it so don’t miss out!
🌹IYKYK🌹⁣ ⁣ what other Seattle legends deserve some recognition?
all these hot new shows are 𝐎𝐍 𝐒𝐀𝐋𝐄 𝐍𝐎𝗪 🔥🥵 (except bartees strange, which goes on sale next Friday!) ⁣⁣ ⁣⁣ happy Friday seattle 💗
seattle sure is taking it’s sweet time.. but we’re almost there 😅 summer (officially) kicks off next Tuesday! what are you most excited for?
let’s hear ‘em 👂
JUNE is here❗️aka Pride & Juneteenth are right around the corner! we’ve got 3 special events to celebrate:⁣ ⁣ - TUNE4TUNE: a night of dancehall, afrobeats, and r&b on June 18⁣ - Y2GAY: an amateur drag contest AND early 2000’s pop dance party ⁣ - Mamma Mia: All Abba, All Night⁣ ⁣ let’s celebrate 🎊
Siri play “As It Was” by Harry Styles 🙃
𝘵𝘩𝘪𝘯𝘨𝘴 𝘢𝘳𝘦 𝘩𝘦𝘢𝘵𝘪𝘯𝘨 𝘶𝘱 𝘢𝘳𝘰𝘶𝘯𝘥 𝘩𝘦𝘳𝘦 🥵 summer is right around the corner and so are all these shows 👀⁣ ⁣ all shows either on sale right now or this Friday morning!
May is done, bring on June! so it’s a good time to announce 𝐒𝐓𝐑𝐀𝐍𝐆𝐄𝐑 𝐓𝐇𝐈𝐍𝐆𝐒 as our theme for June’s Trivia Tuesdays 👀 ⁣⁣ ⁣⁣ celebrate the new season by testing your knowledge of seasons 1-3 every Tuesday in The Runaway at 7pm! $200 cash prize at the end of the month 💰
in honor of the summer weather we’re getting this weekend, single day tickets have been released for Capitol Hill Block Party ☀️🥳 which day is your favorite? ⁣ ⁣ can’t wait for the best weekend of summer!